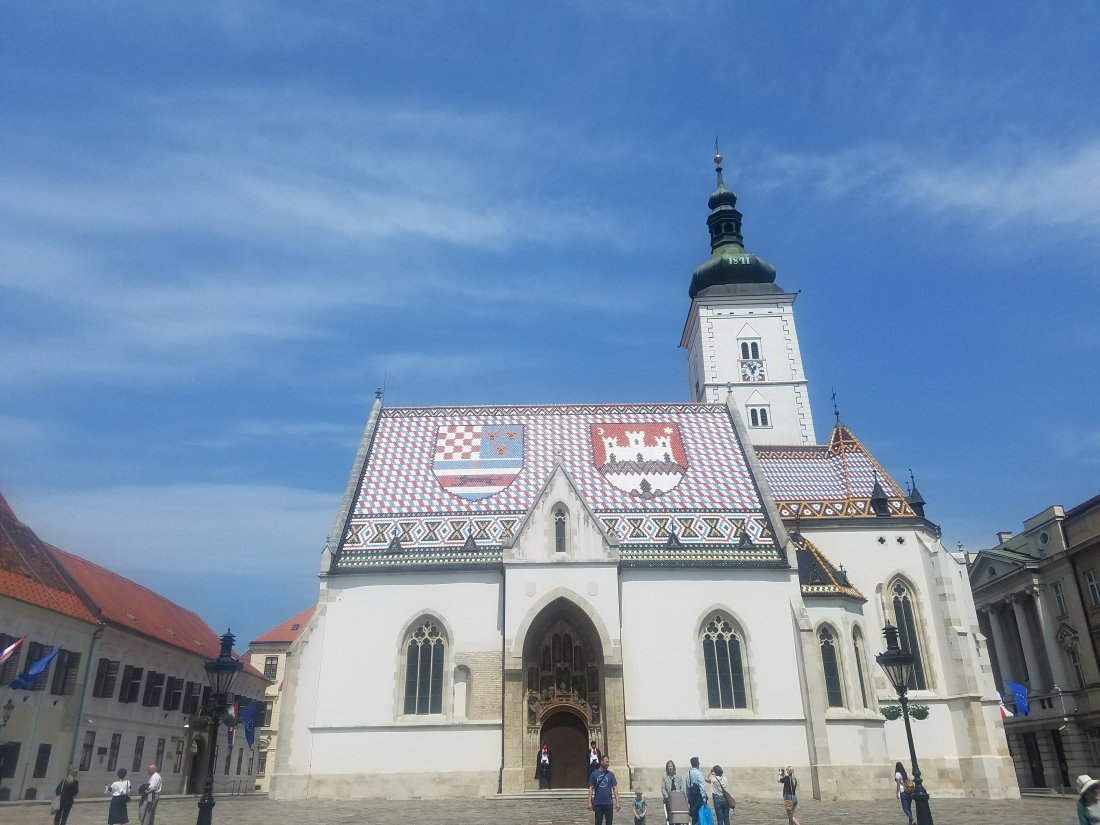 Zagreb is not initially what I would call a ‘pretty’ city, like Ljubljana was. It is what Wyatt calls a ‘city- city’. The more time I spend here, the more I appreciate and enjoy its charming character, rich history, and outdoor cafe scene. Here are some of the things we enjoyed while in Zagreb.

There are two upper towns in Zagreb, and they actually had beef with each other back in the day. The Kaptol area has a beautiful cathedral which, just like Barcelona, is under constant construction. Other enticing features include a glistening Holy Mary fountain, which the kids called The Goldy, and some gorgeous gold-roofed buildings. 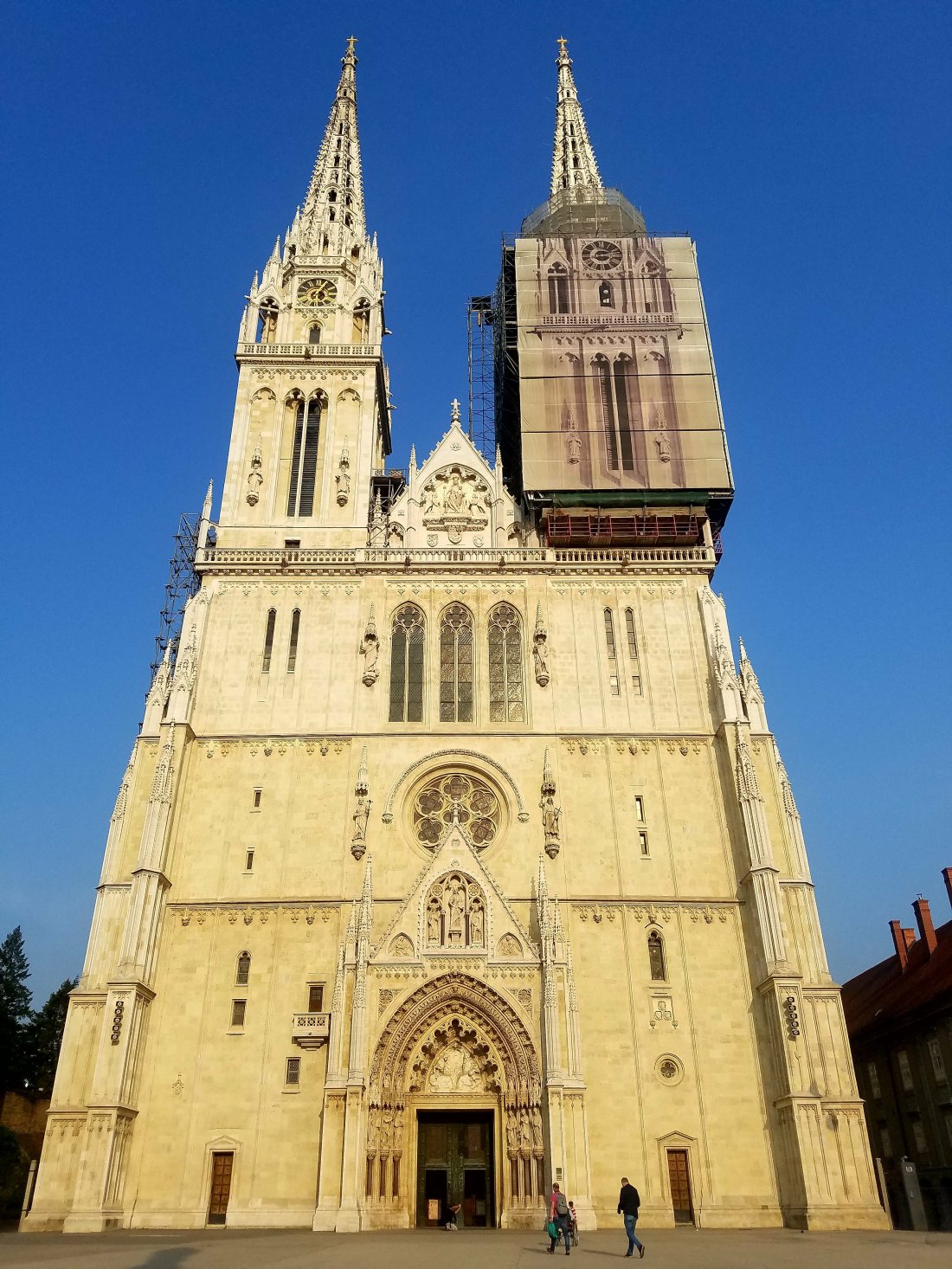 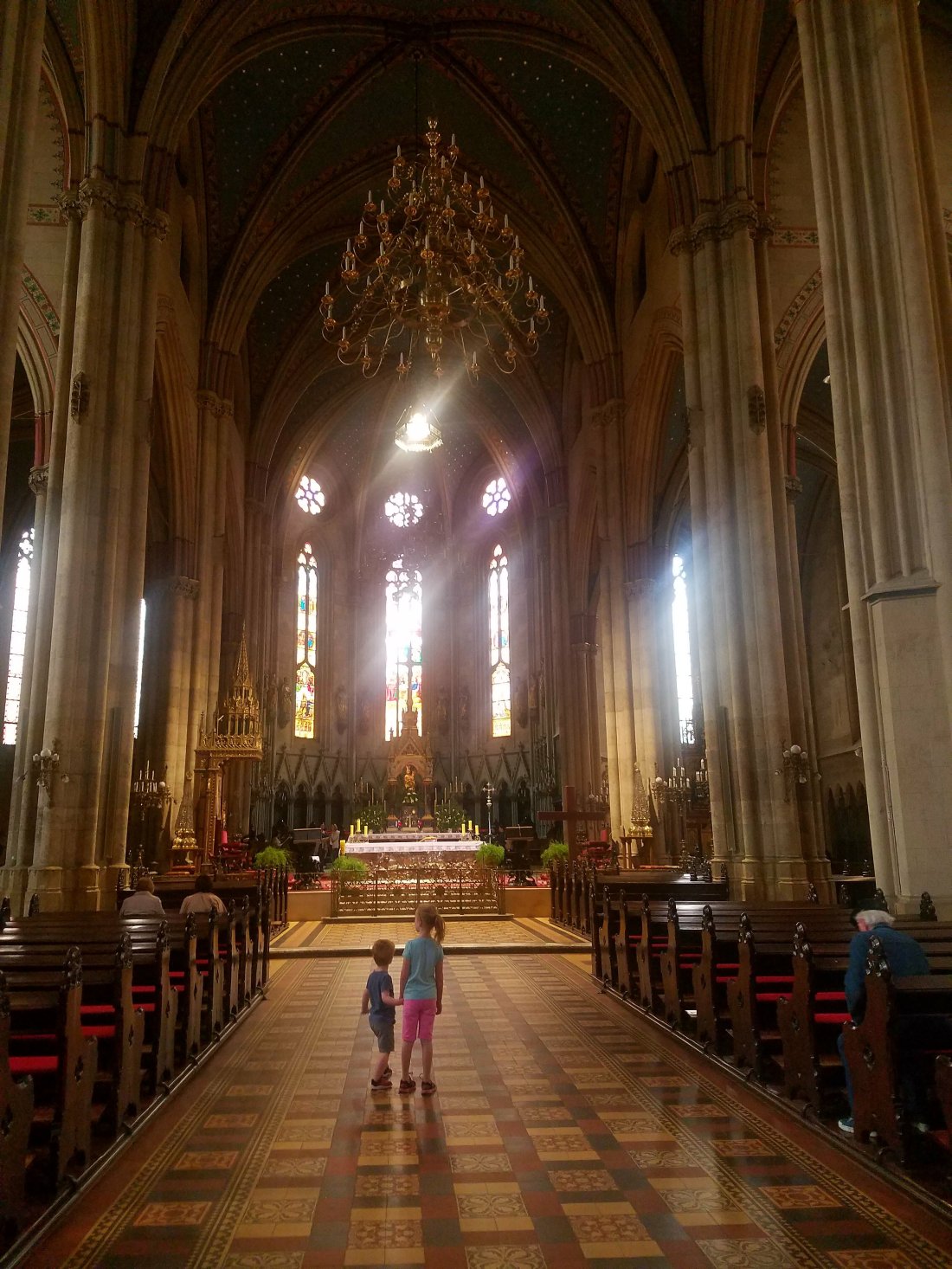 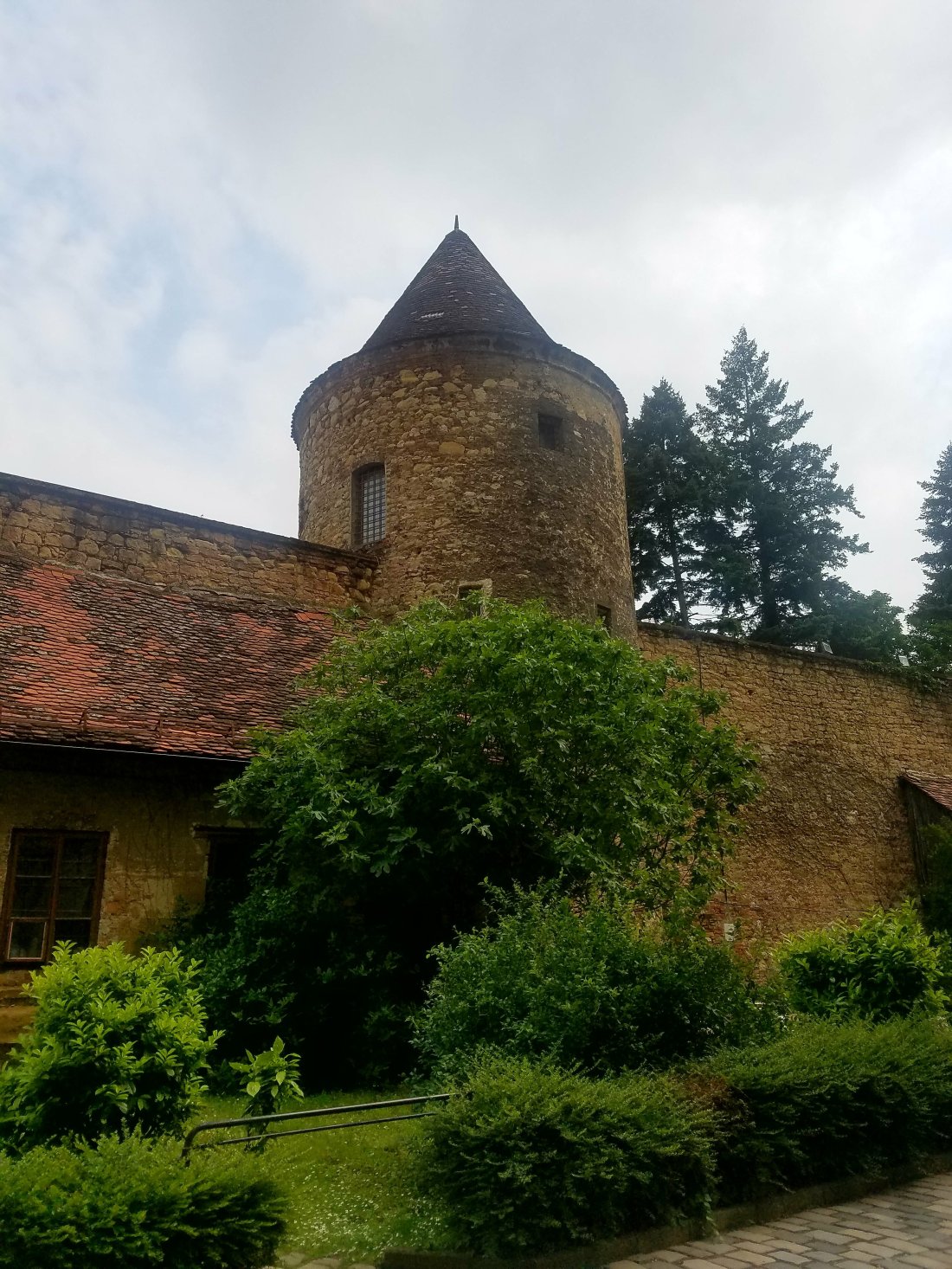 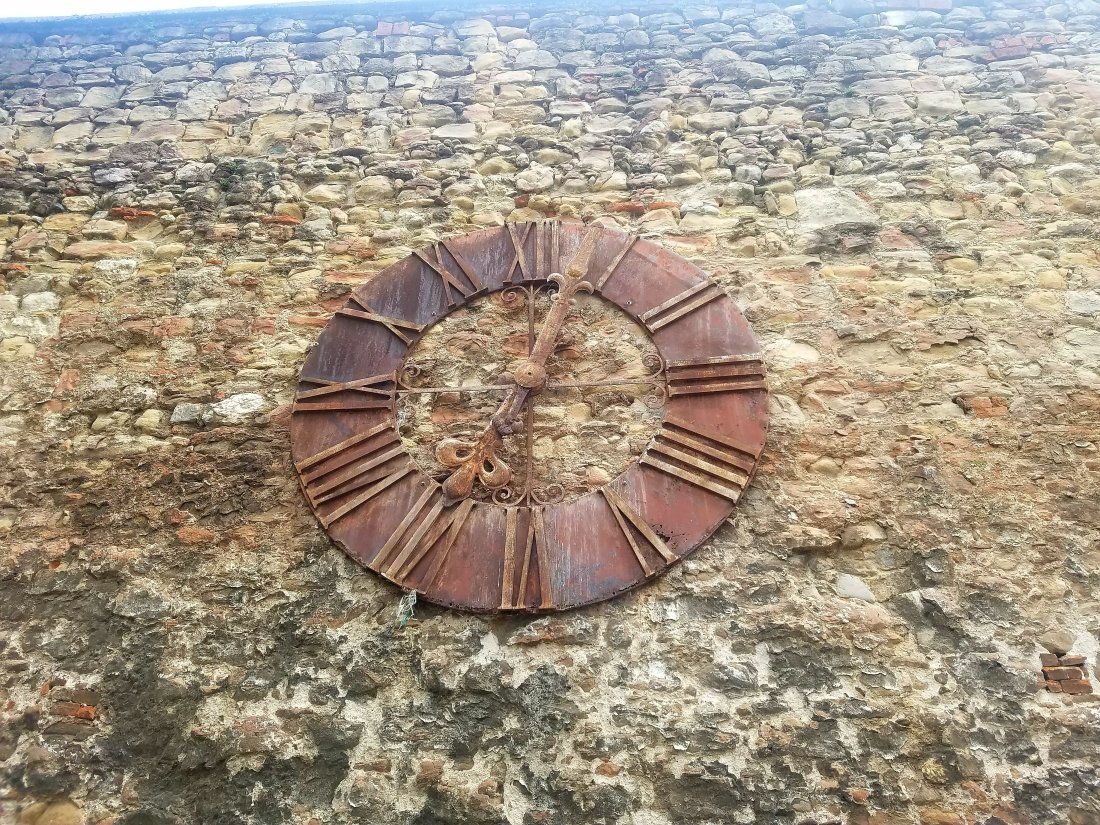 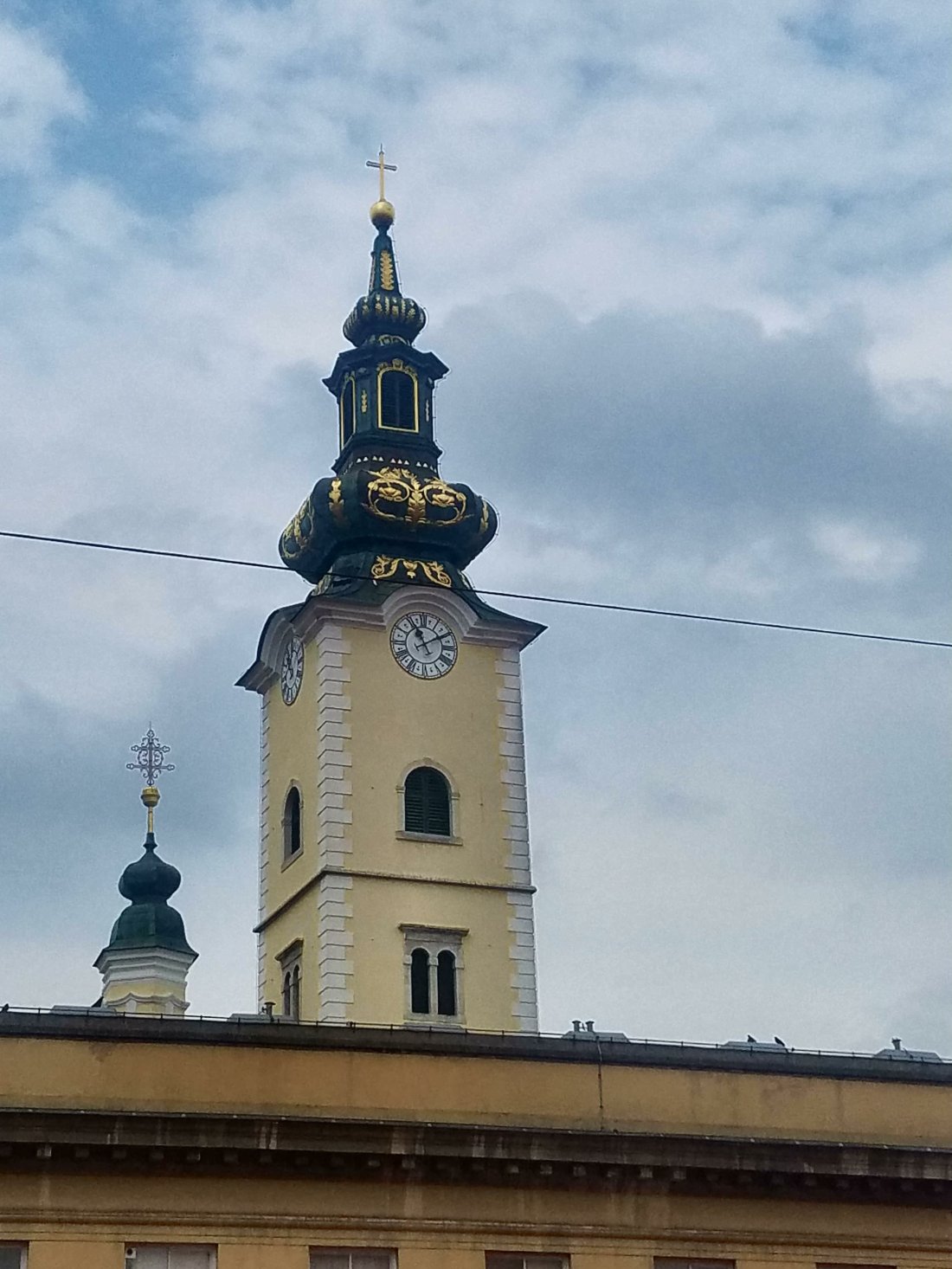 The ‘other’ Zagreb upper town, Gradec, is lined with cobblestone streets. One of the main attractions is Saint Mark’s Church. The outstanding feature of the church is its roof which has the medieval Croatian coat of arms on it. Today there were some stern looking guards outside who, when peppered with questions from my curious two, refused to speak. And all of a sudden they embarked on a little march for themselves. 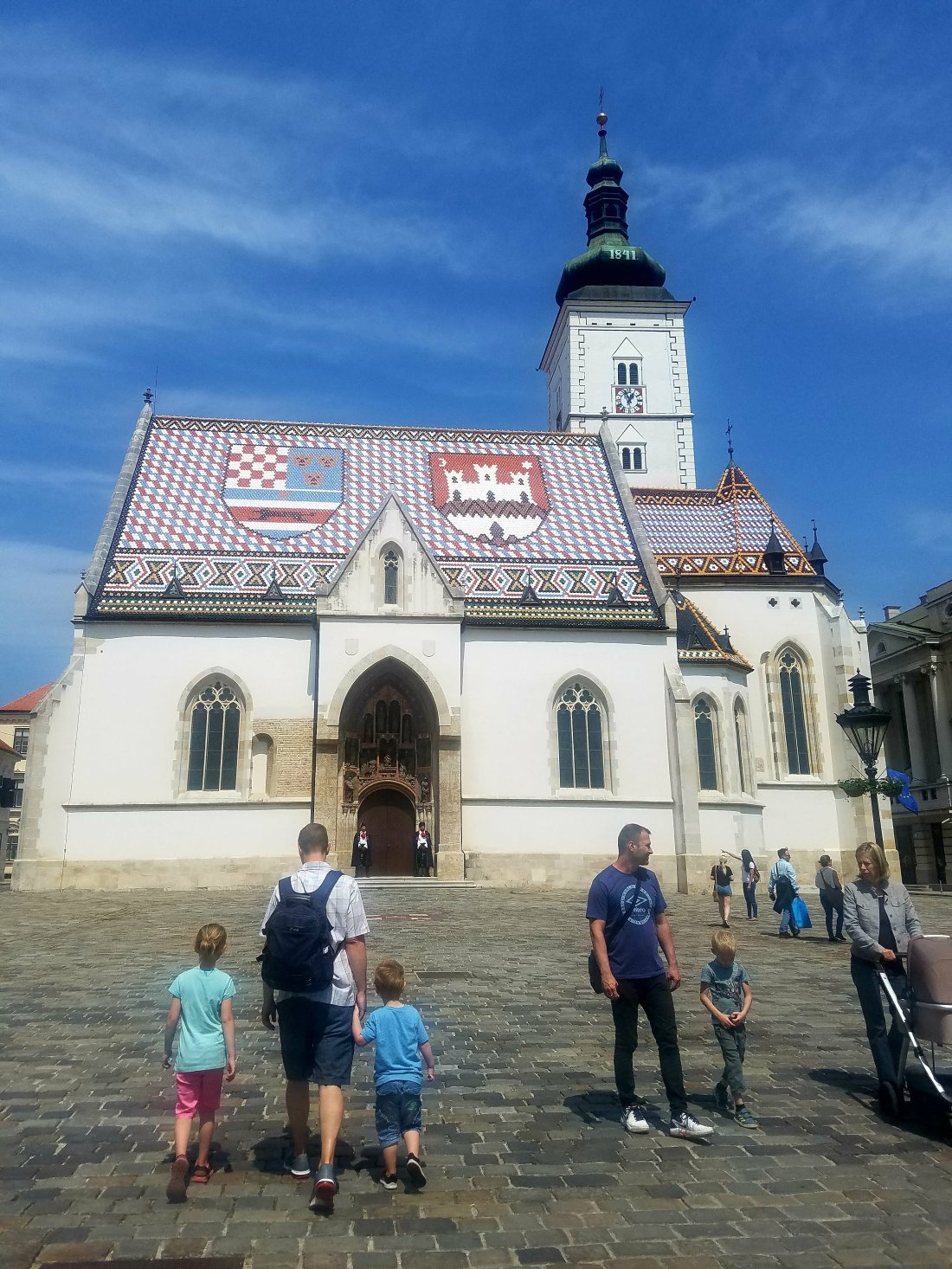 At noon everyday, a cannon is shot out of the tower in Gradec. Even though we knew it was coming, it still scared the life out of us. We caught a video of it.

There’s some impressive views of Zagreb from up here.

And Zagreb has it’s own mini lock gate with more fab views overlooking the city. 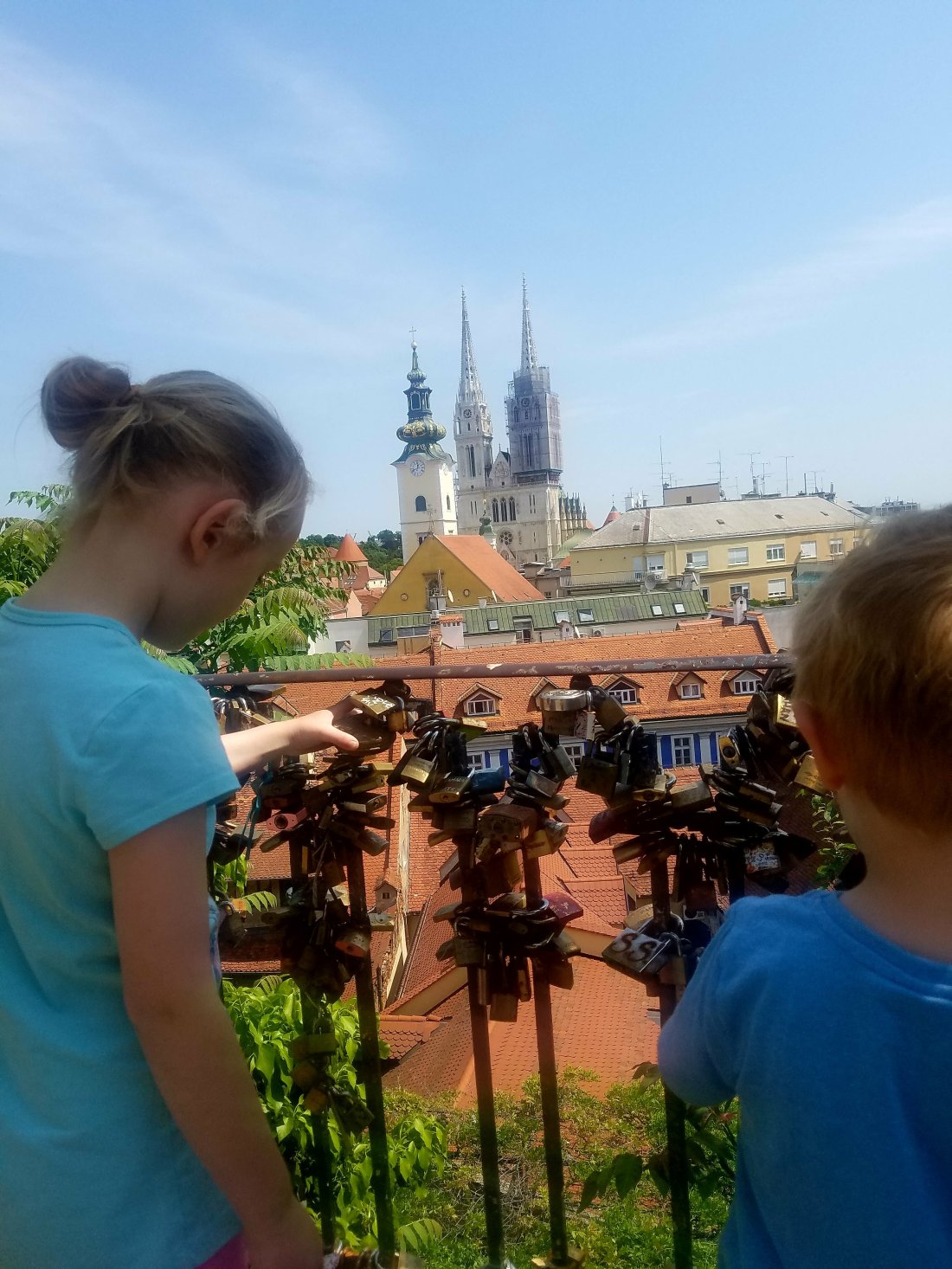 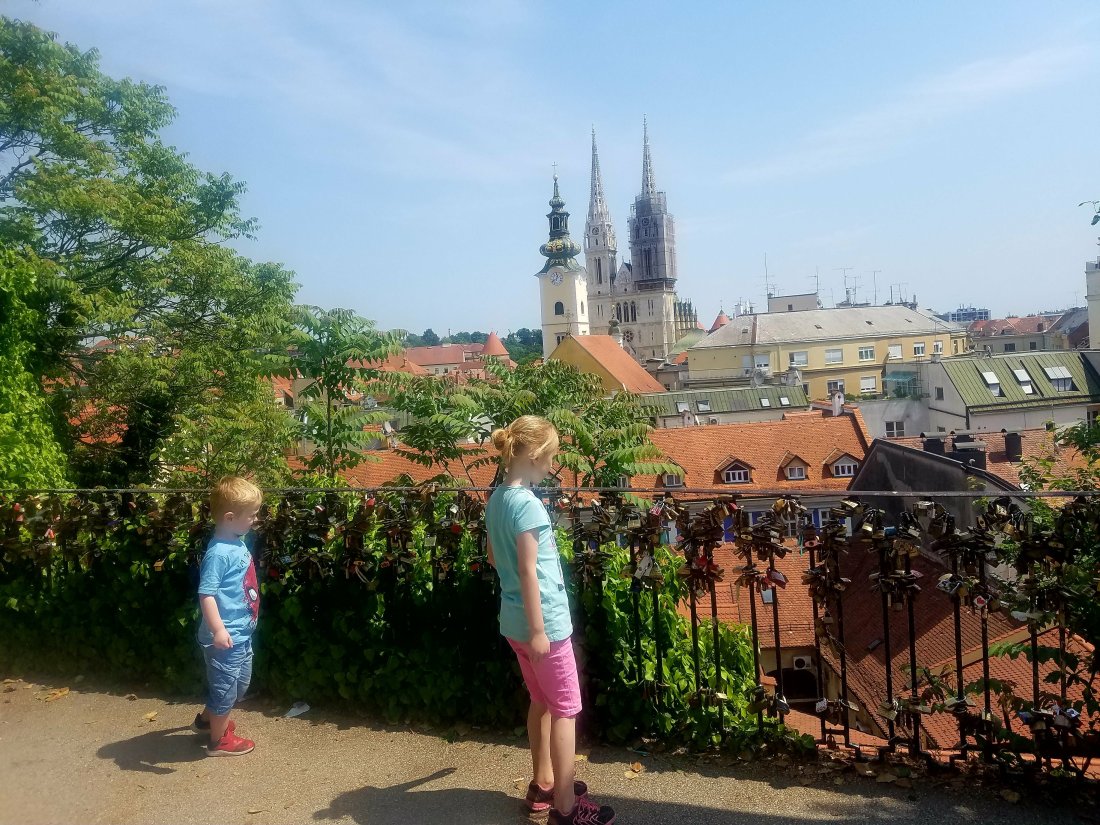 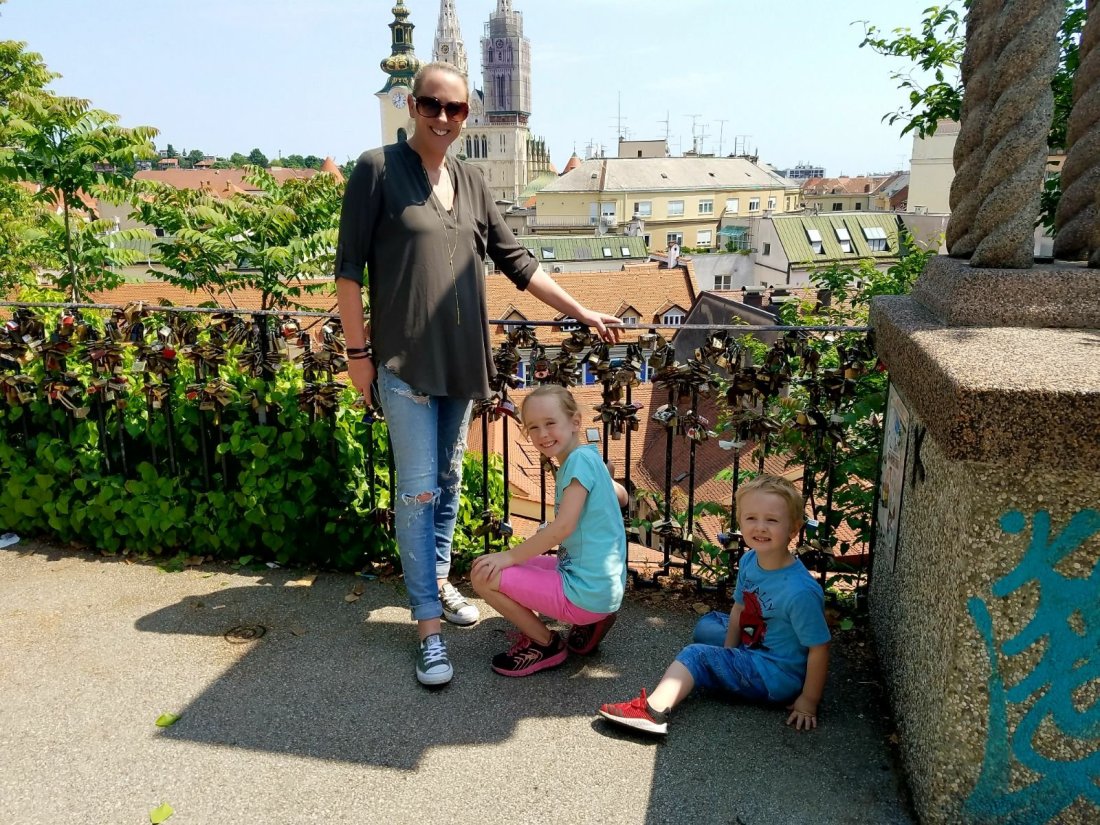 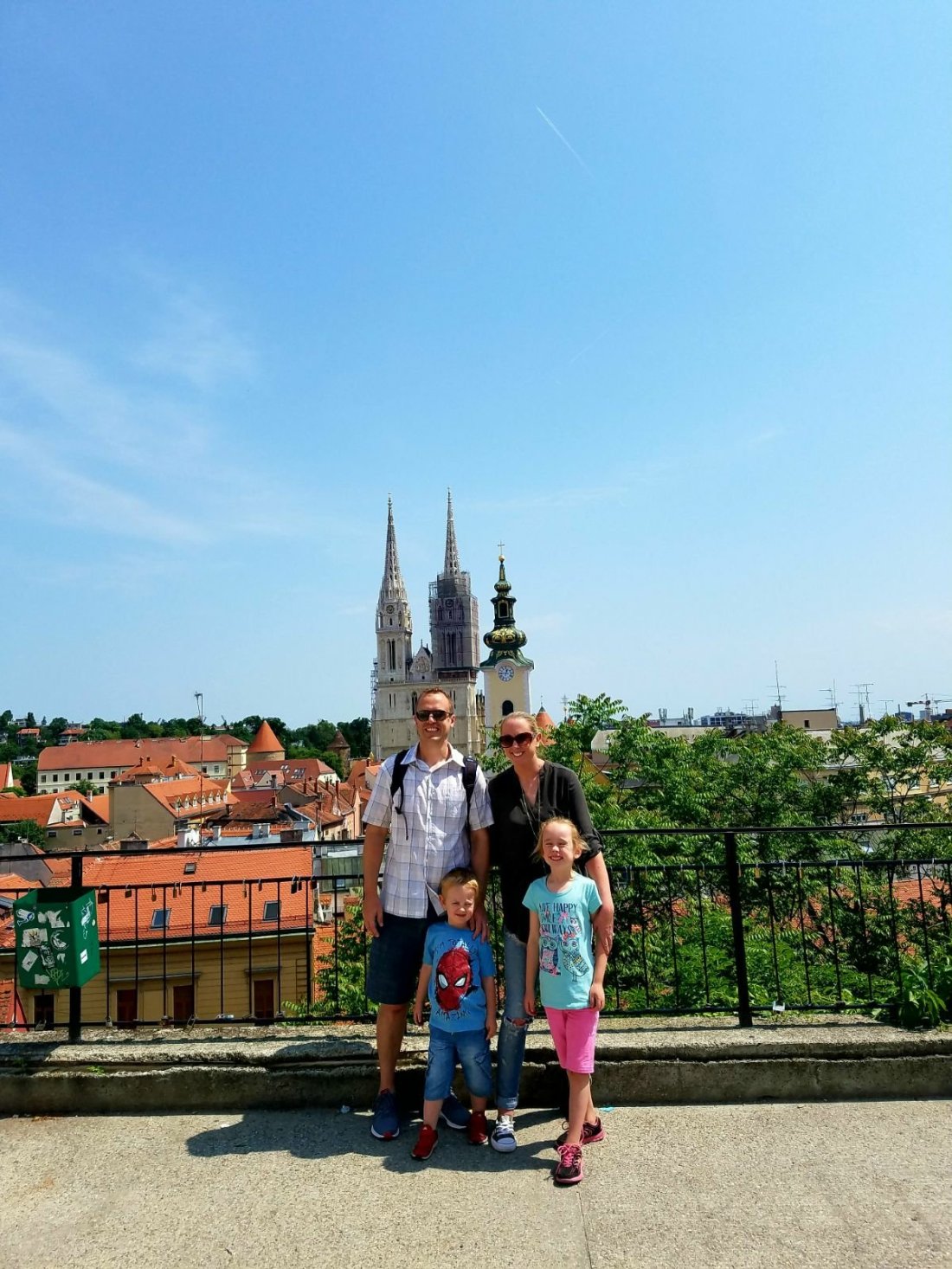 The kids even found their favorite street artist in the area up here.

A tiny funicular links lower town to upper town. We were cruel though and made the kids walk up!

And right by the city wall we stumbled upon a little shrine tunnel to the Blessed Mary. We had no idea we were coming up on it, and were shushed vigorously as we entered. 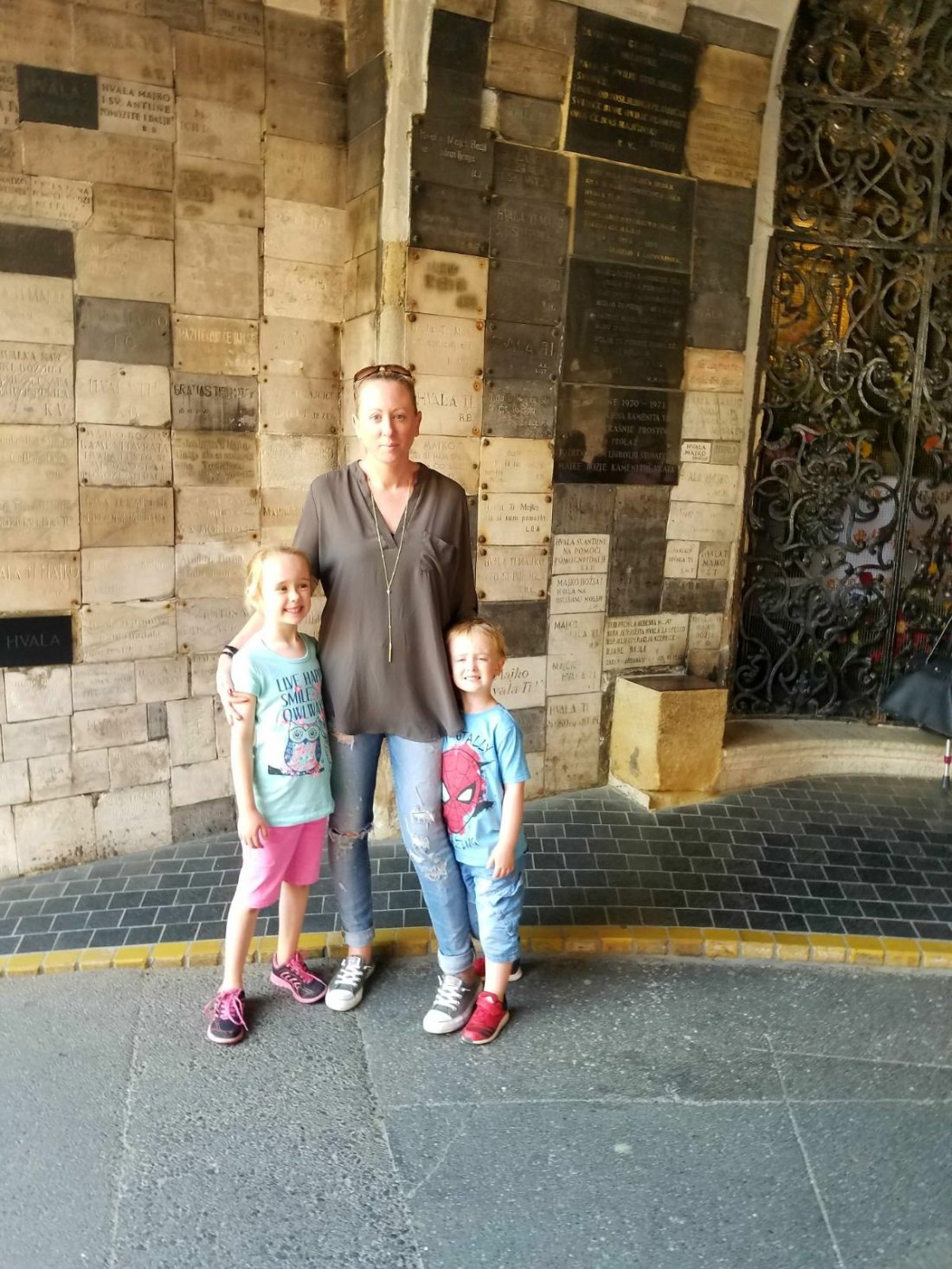 A mix of swanky hotels, outdoor cafe streets and some lovely parks and quirky statues make up Lower Town. 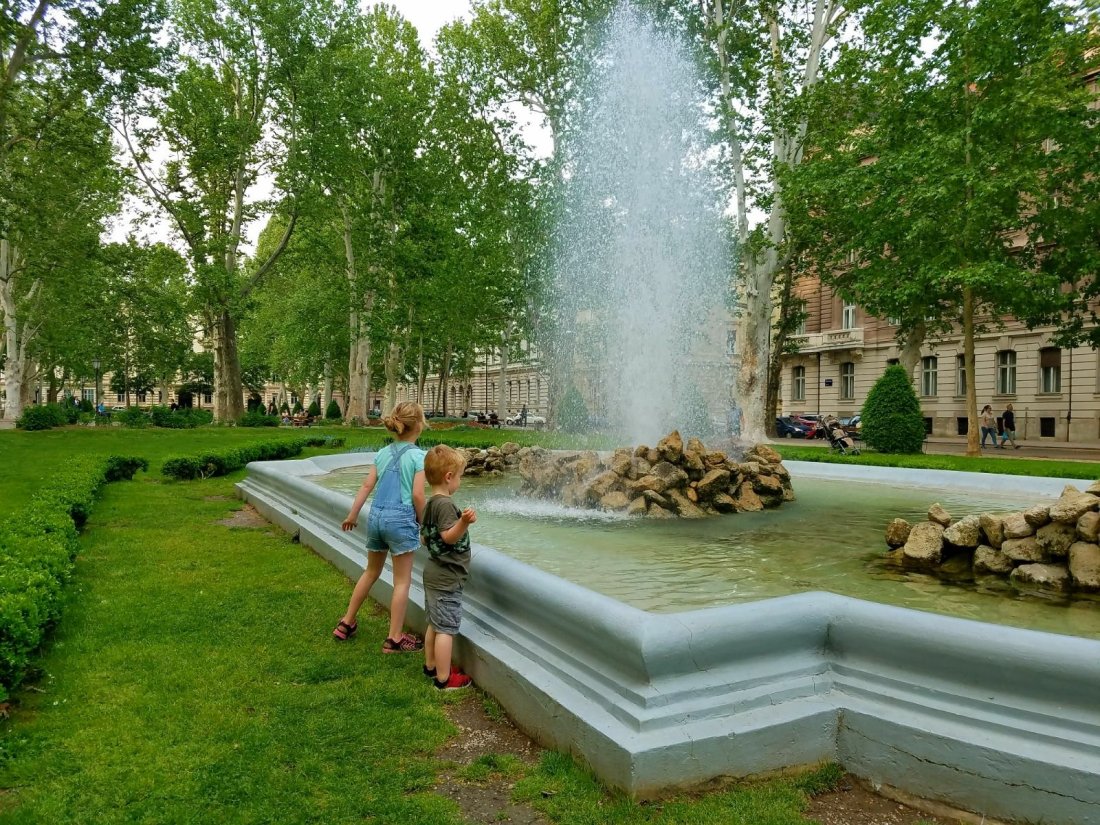 This delightful street was one of my favorite parts of Zagreb. I haven’t a clue how to pronounce the name! It is lined with restaurants and the vibe is very hip. This is where Zagrebians come to eat during the day and party at night. 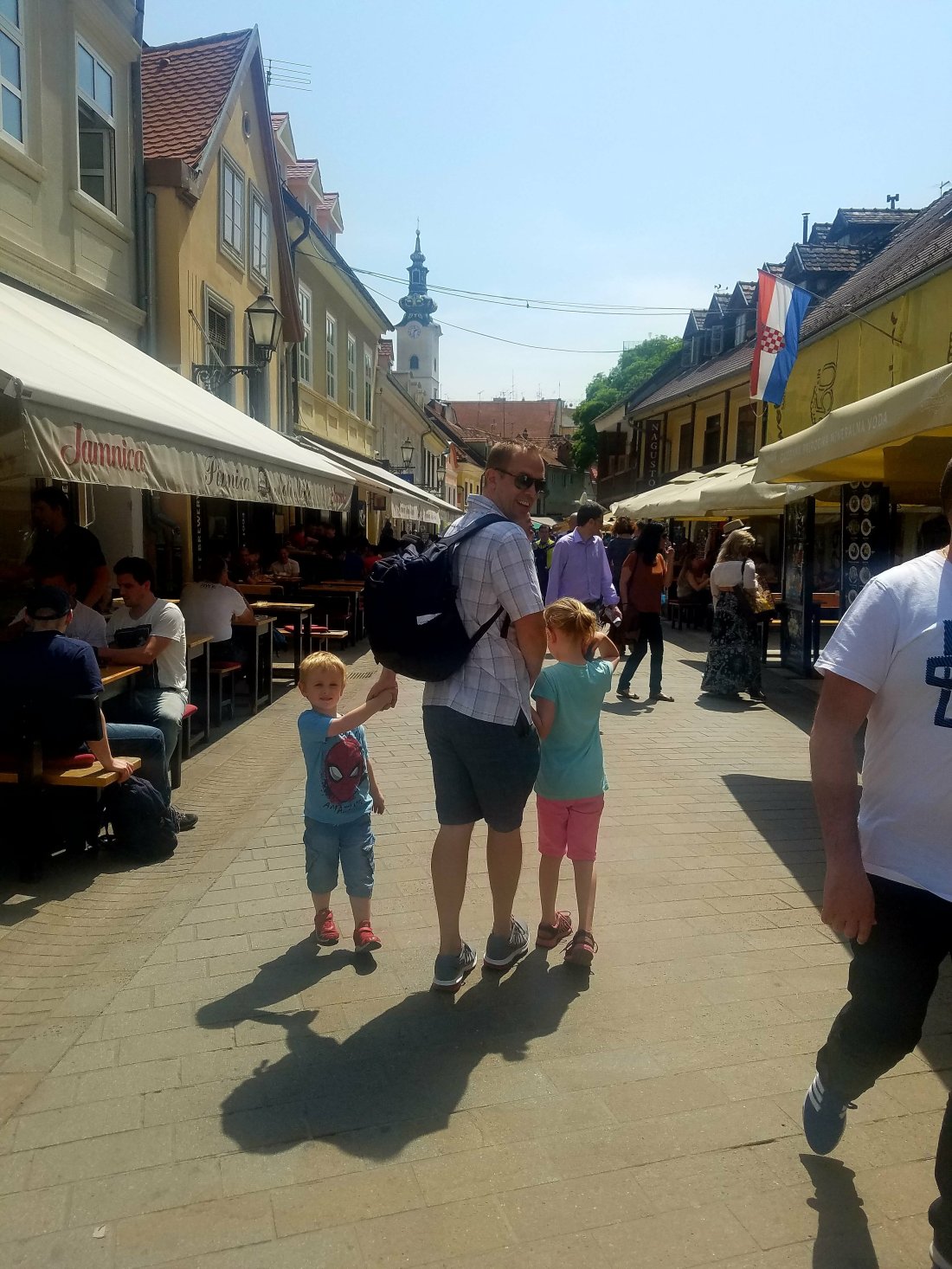 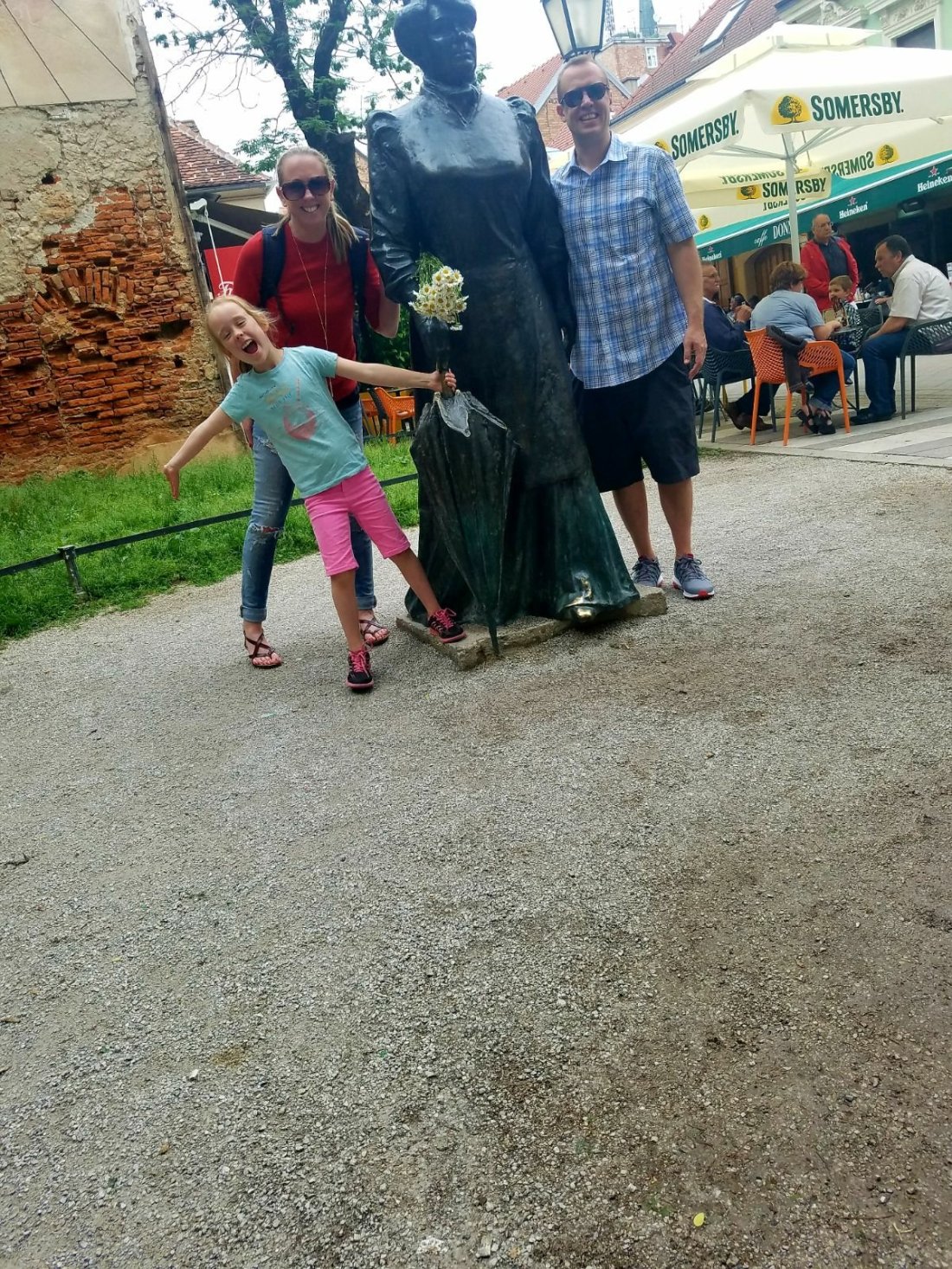 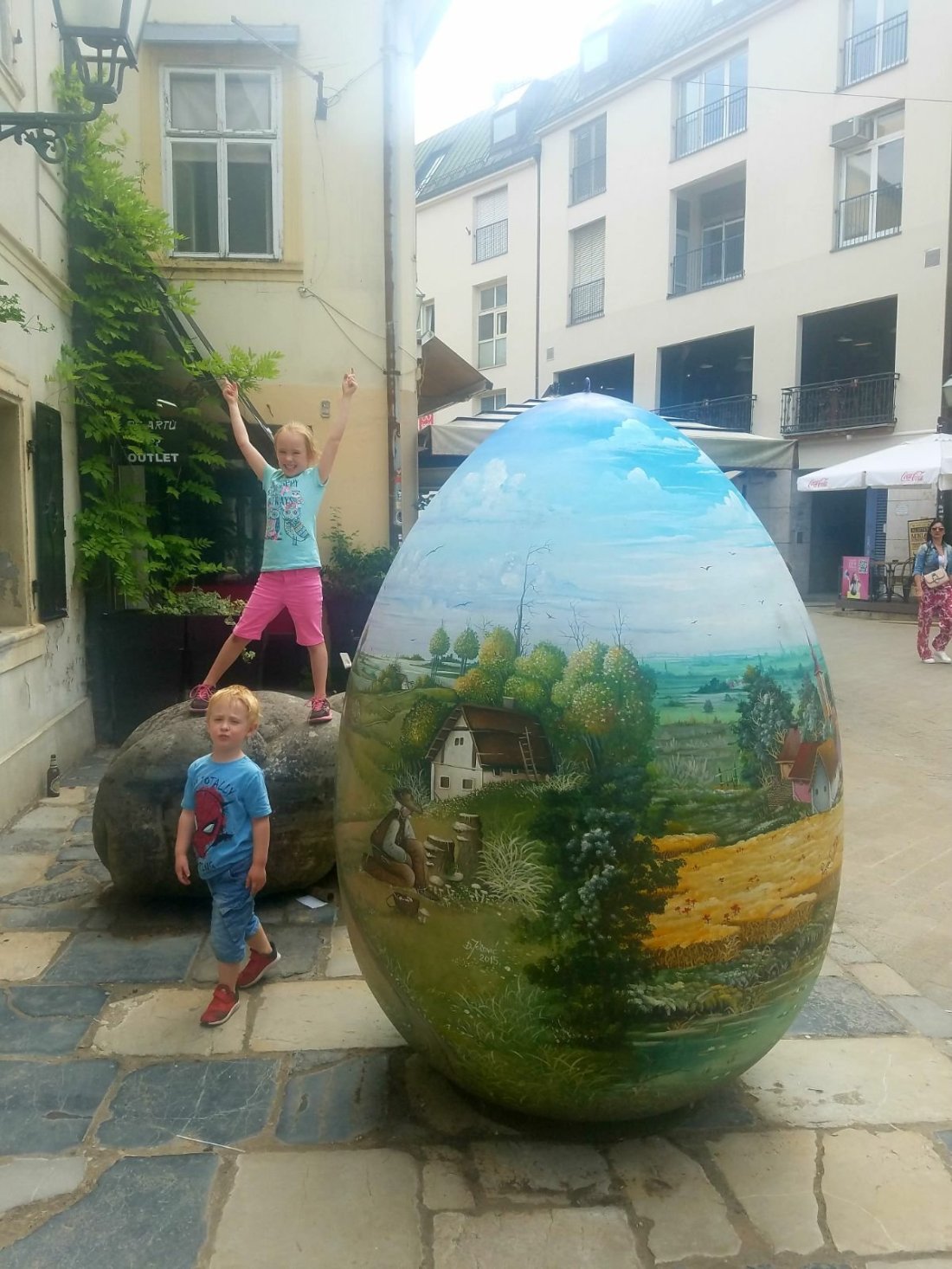 There is a store on this street called Here Lie Dragons, AKA The Nerd Store and the kids (and I) loved it! 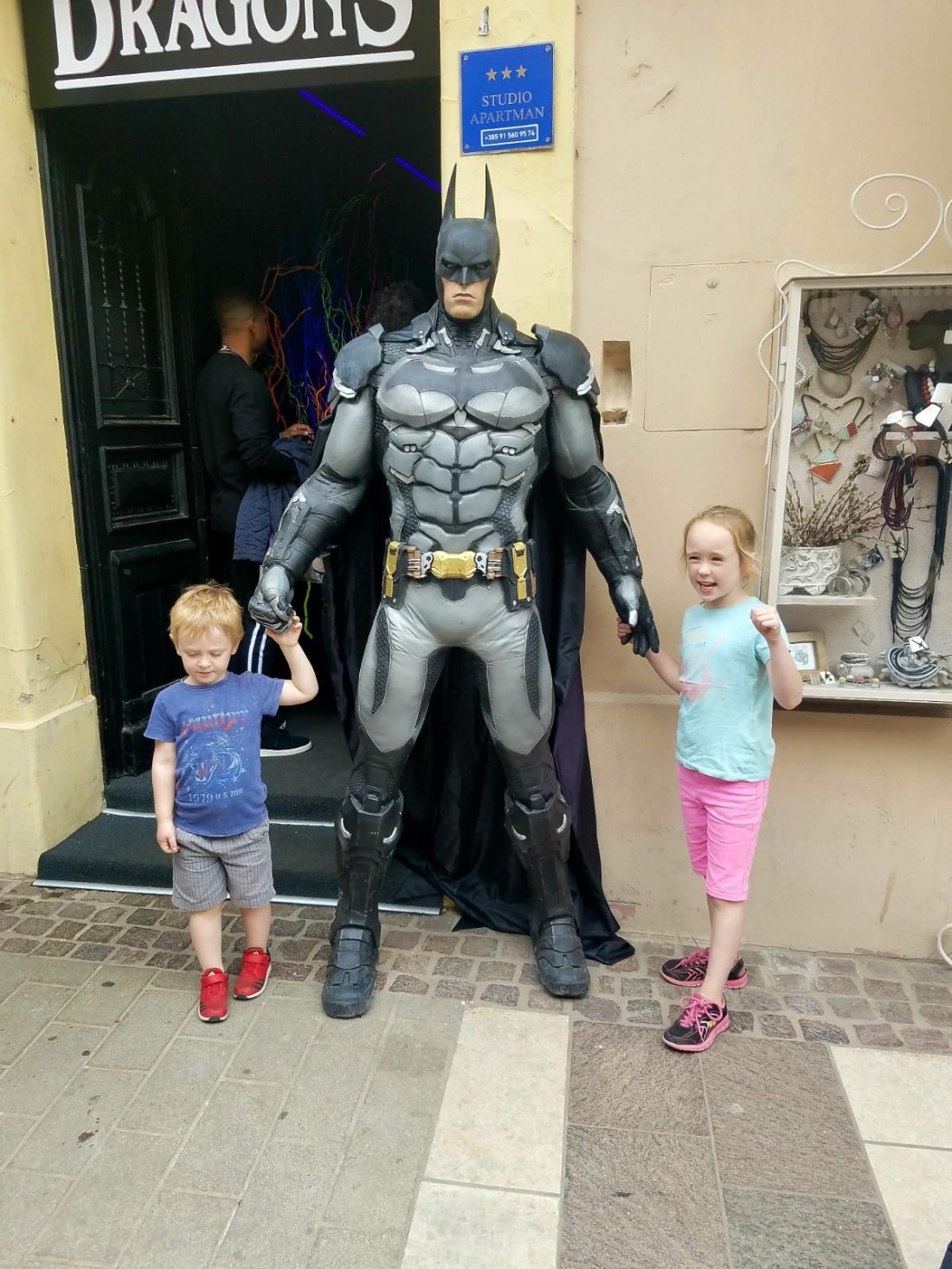 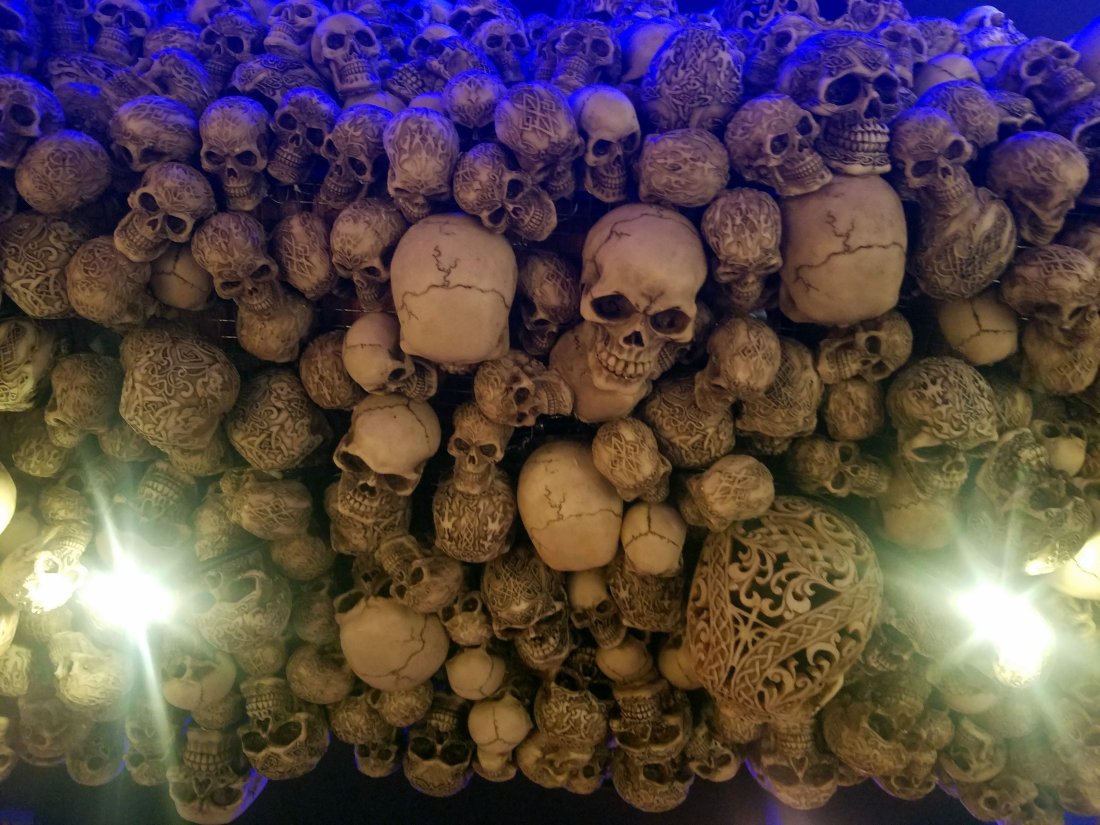 …and they had The Hound’s helmet. Eeeeek! 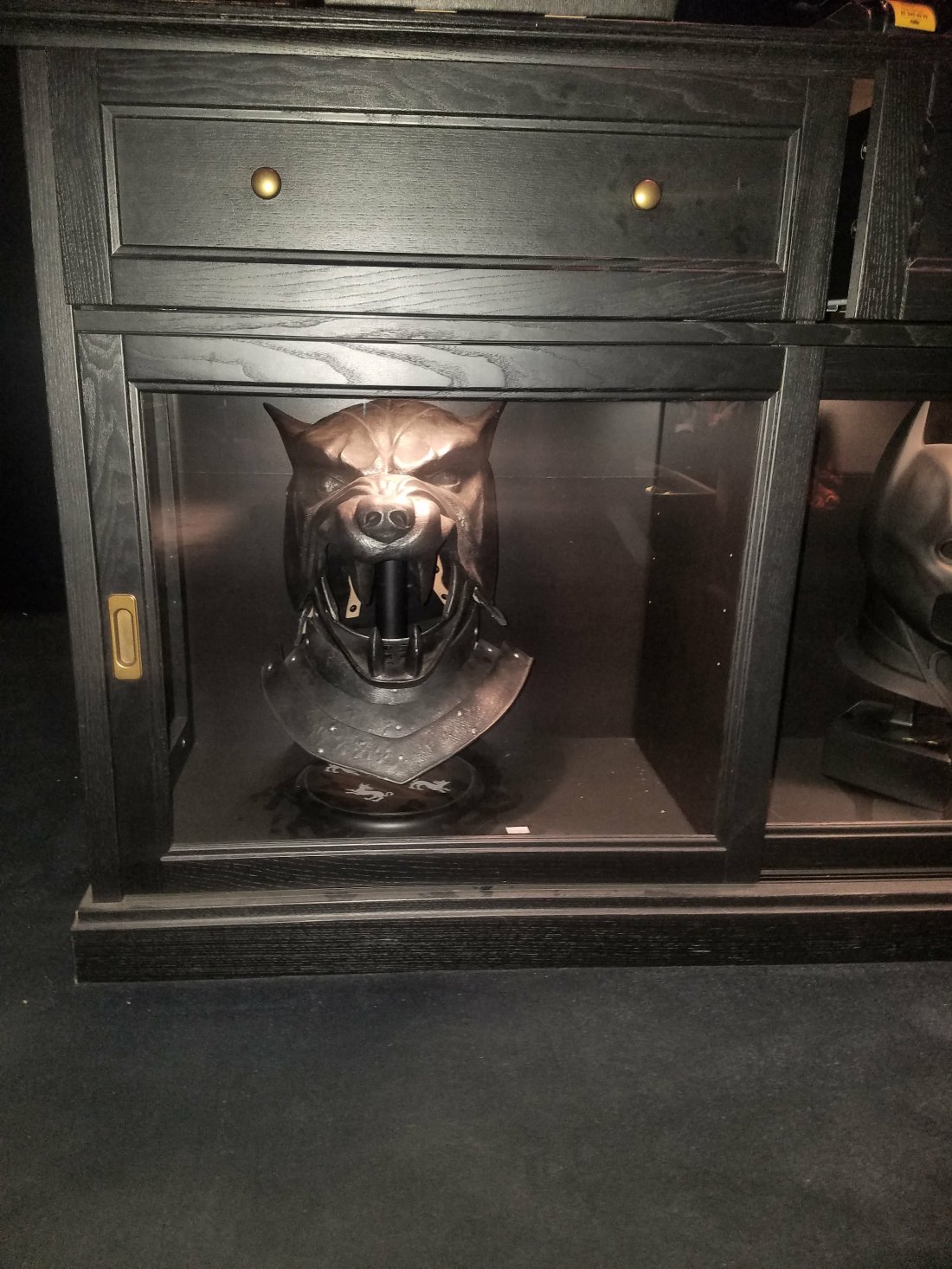 Museums
Zagreb is full of museums, with some very quirky ones including The Museum of Broken Relationships, The Torture Museum and the 80s Museum. 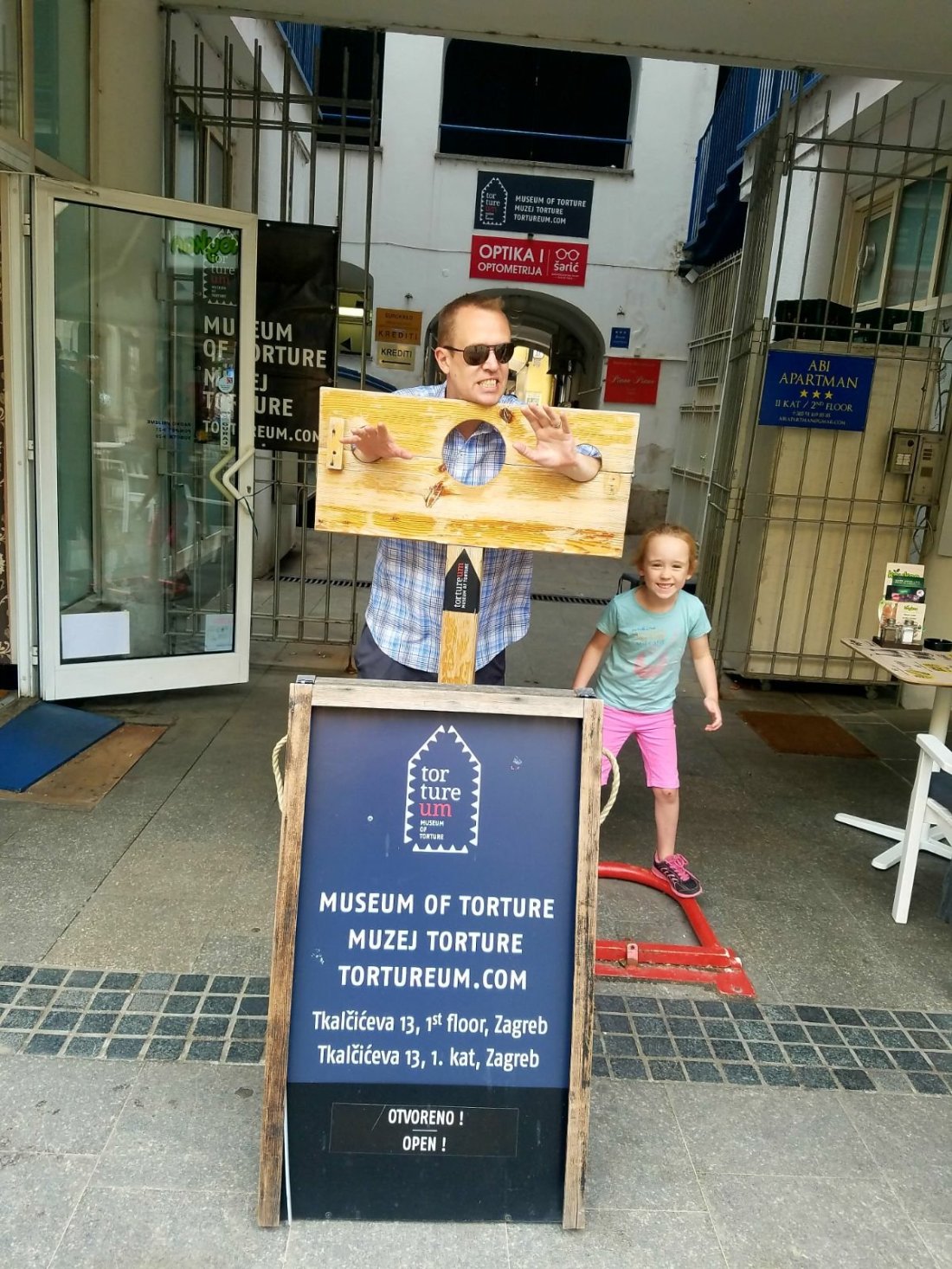 We settled on The Museum of Illusions to bring the kids to and I’m so glad we did. This is a tiny two-storey museum crammed with some awesome stuff. 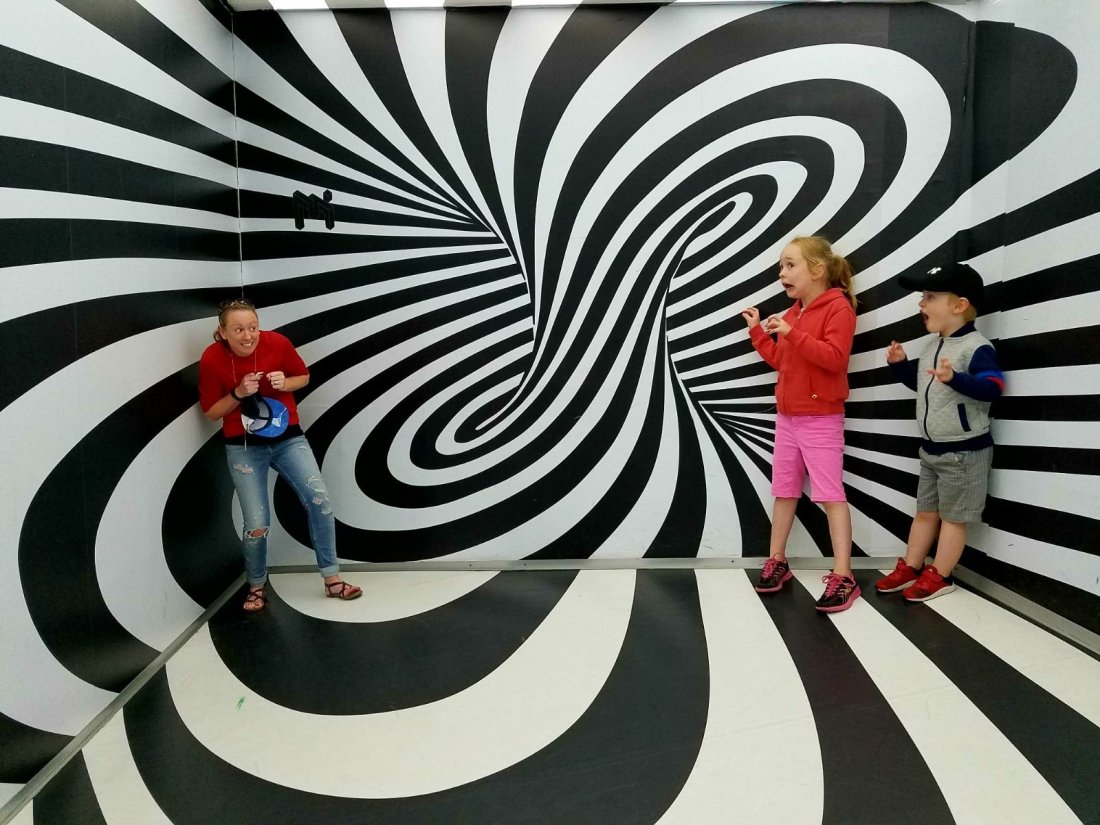 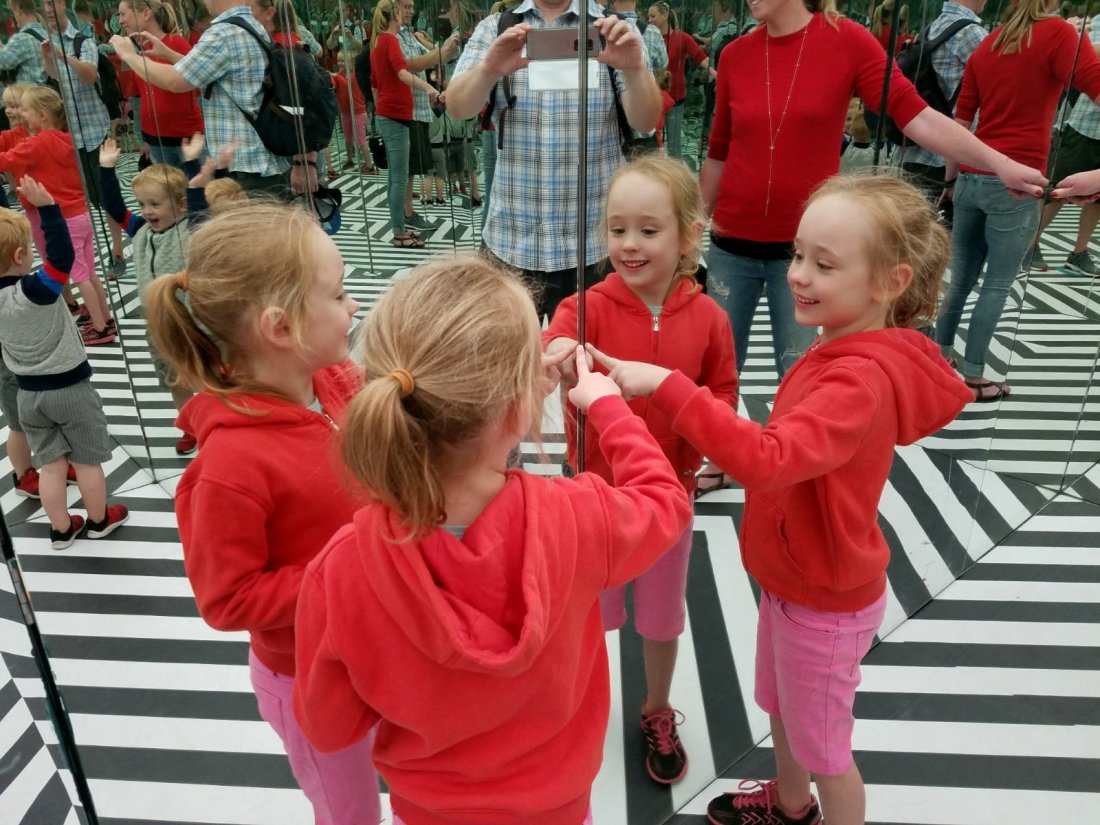 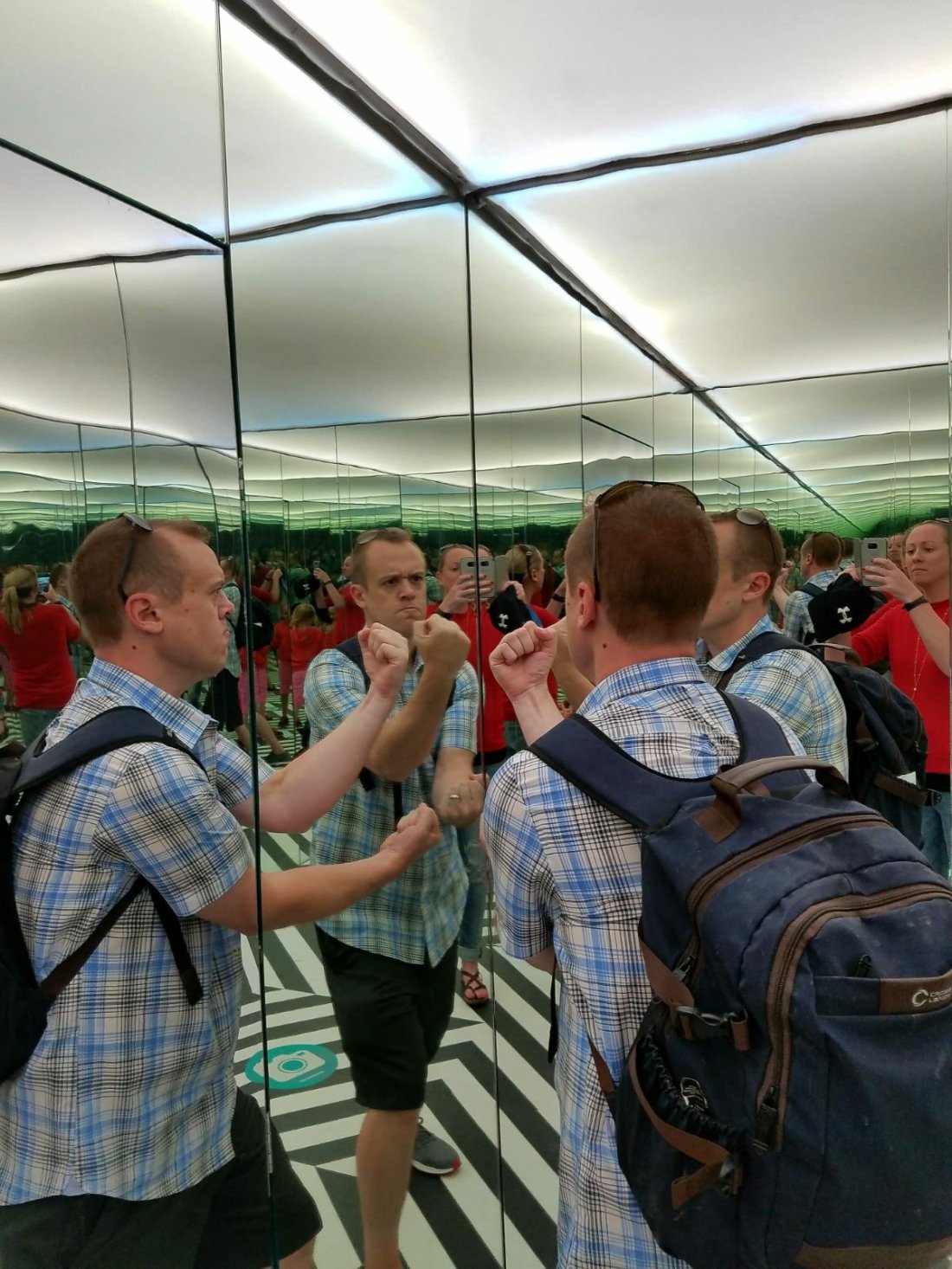 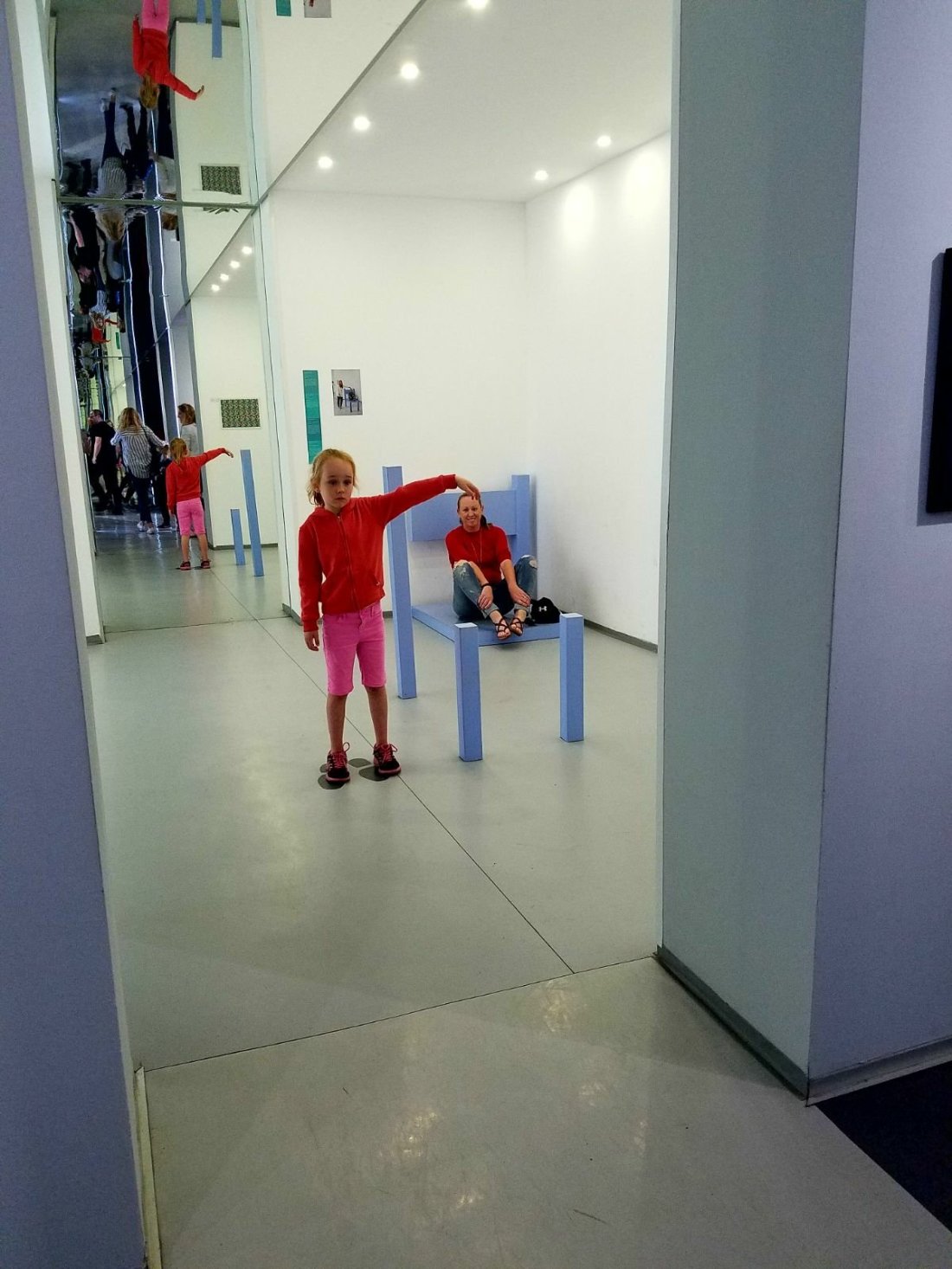 Don’t stare at this one too long…….

Zagreb has a daily farmers market and it’s pretty big. Stalls upon red stalls offer almost everything. Of course, the kids were fascinated with the toy stalls.

This is at the heart of Zagreb and connects the two upper towns and lower town. The statues of Cont Josip Jelacic overlooks the square with his sword permanently taking aim at his audience. 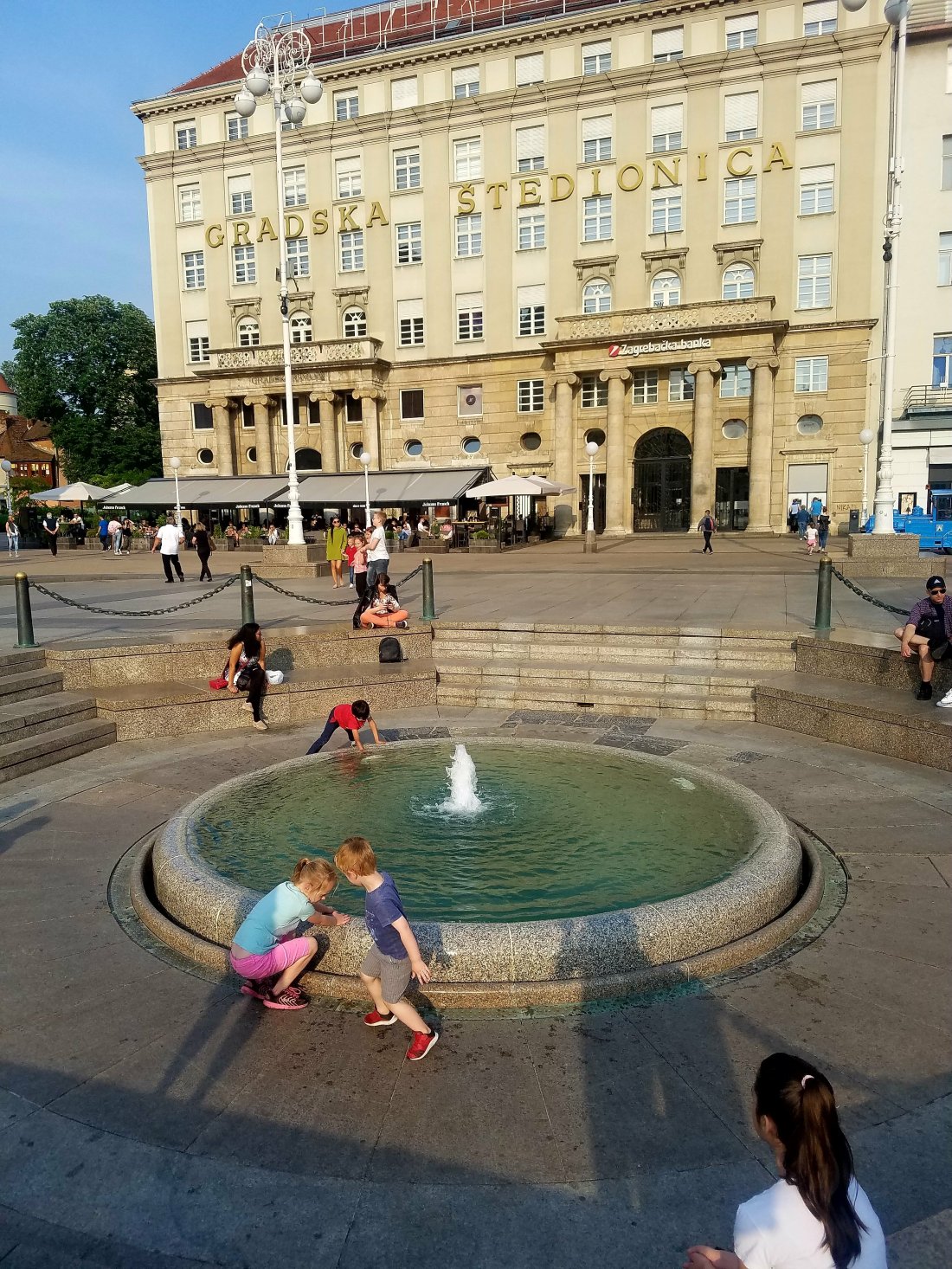 …..and then yesterday evening the kids met The Pigeon Man of Jelacic Square and this happened: 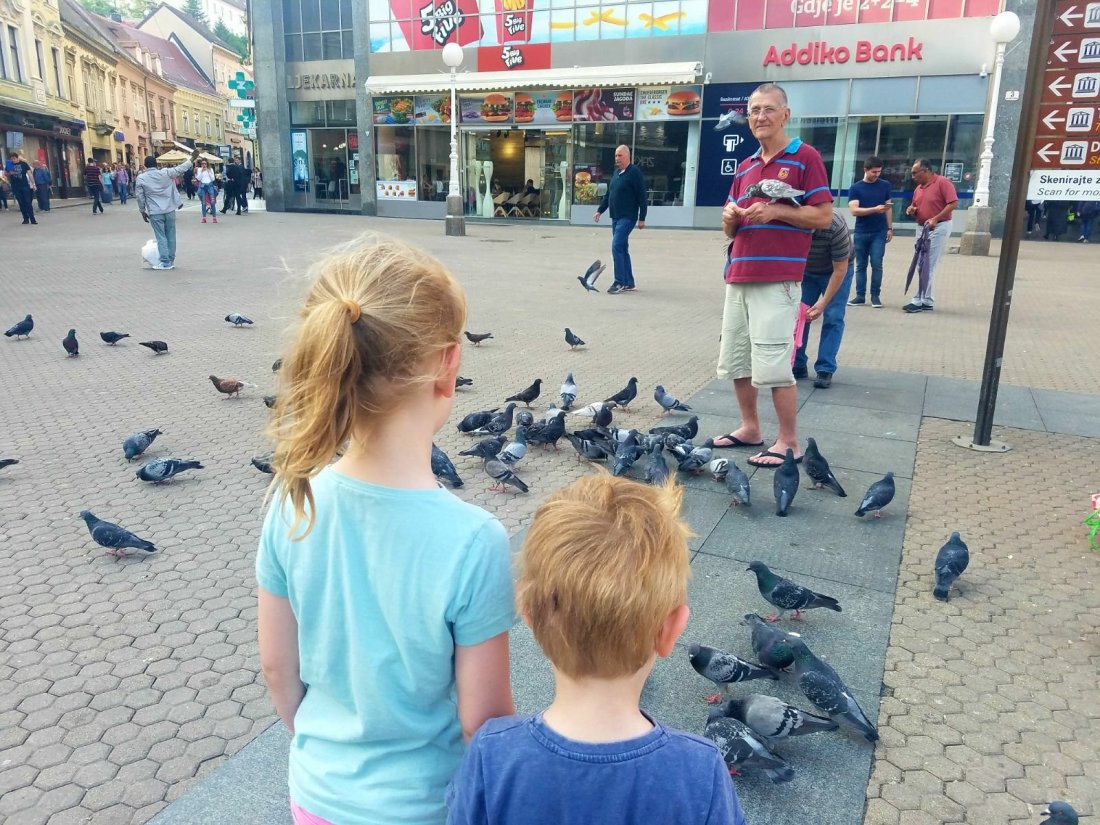 I tend to think of pigeons of rats of the sky so there was a lot of hand scrubbing when we got home. Ro was so enthralled with the experience that her new spirit animal is now the bloomin pigeon.

We also came across soldiers marching in a very serious manner as we left the square. It was a little eerie if I’m being honest! 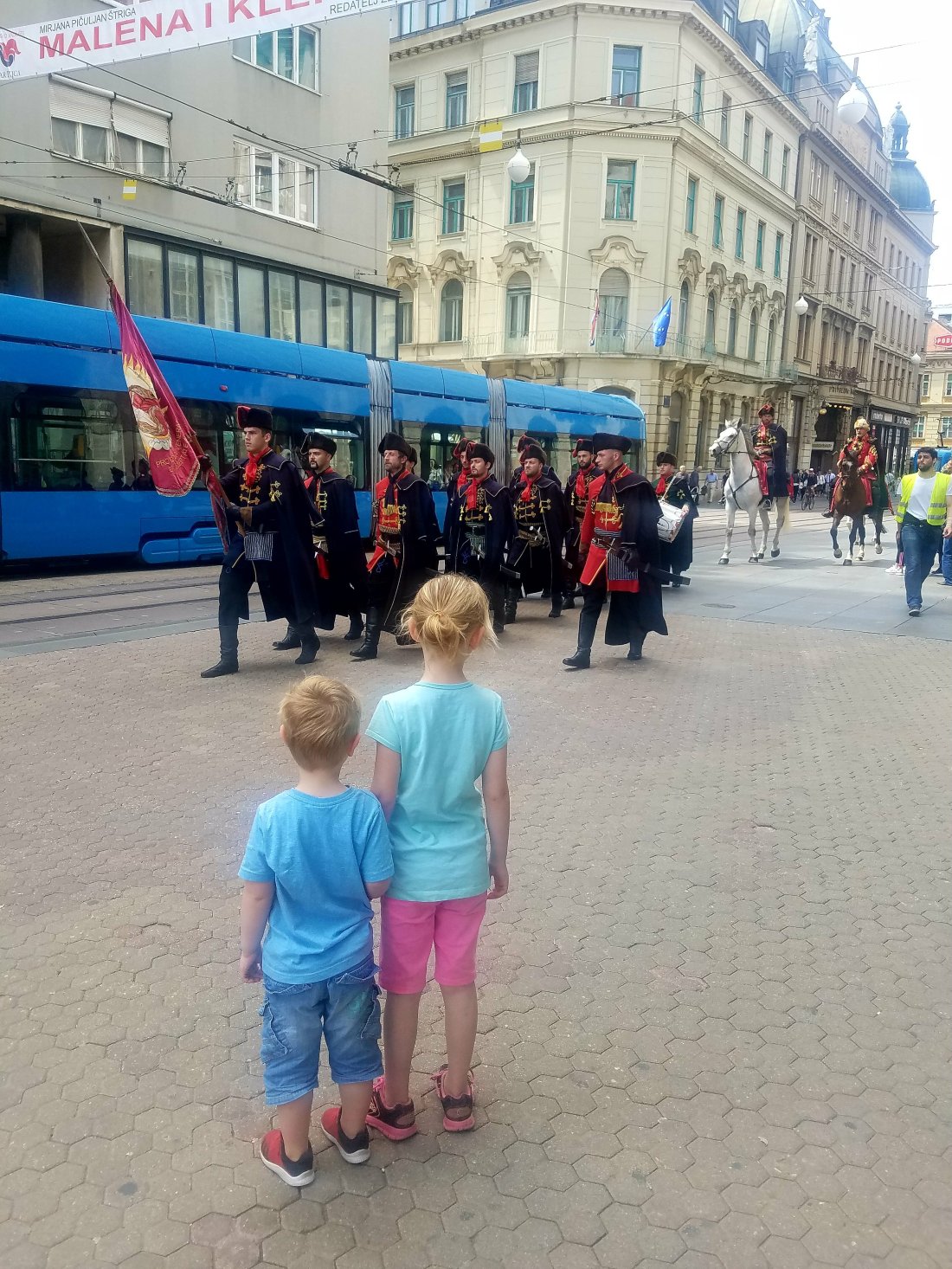 The little blue train leaves from the square and takes you on a figure 8 fifteen minute journey around the lower city. As KJ is a big ‘Choo Choo’ fan, this was a highlight. 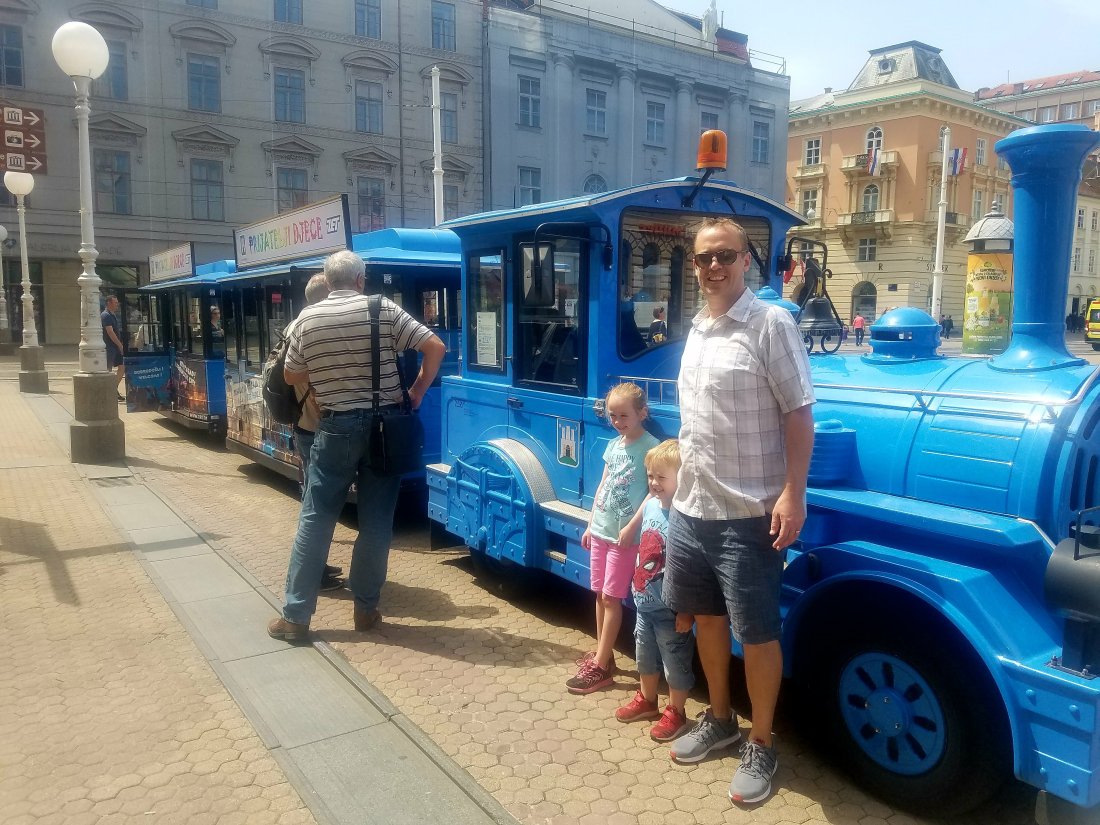 We were pleasantly surprised with the food of Zagreb. There is a thriving restaurant scene here. Two mentions in particular.

No pictures of this one, but Kelly’s Grill had the best burgers either Wyatt or I had ever tasted. High praise indeed.

Heritage is a Croatian hole in the wall cafe with incredible authentic light bites. Soooo good!

Because we happened to be in a Zagreb park on May the Fourth, we came across an awesome Starwars event and snapped some pics for the kids.

And finally…the bells! They are everywhere! All the time!!!

One more day to soak in Zagreb and then, next up- Plitvice Lakes National Park.